For my board game session, I brought two sets of Star Wars: X-Wing Miniatures game. This includes two core-sets (each with two TIE fighters and one X-Wing), one millennium falcon, and one firespray. Without these extra components, it would not be possible to have more than two players for our session.

Before starting a session of X-Wing, it is essential to determine what mission is going to be played. Unfortunately, I did not have enough time to establish a 4 player mission that we could quickly set up and play. While the rule book provides a quick startup mission for two players, it does not for four. In addition, the other three players have no experience with the game, so it was more difficult to set up in the allotted time (about one hour). 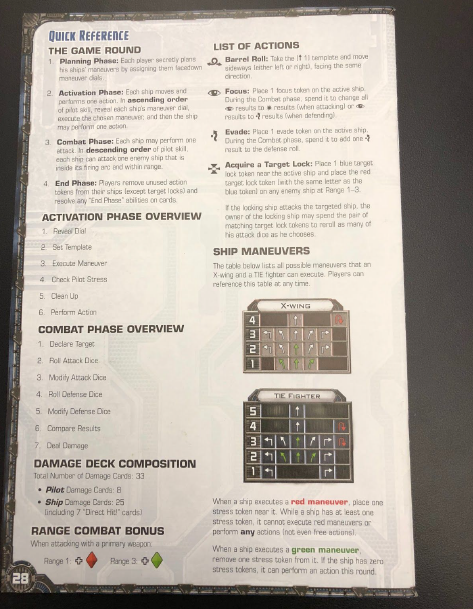 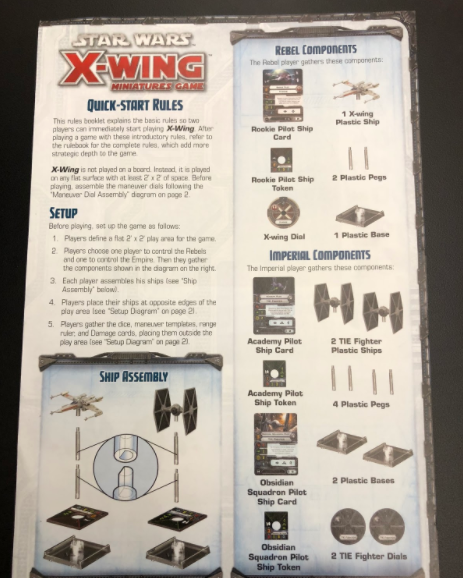 Therefore, I decided to have a simple mission of 2 versus 2, where the win state is reached when the other two players are metamorphosed into space dust. This is always a win state for X-Wing games no matter the mission. 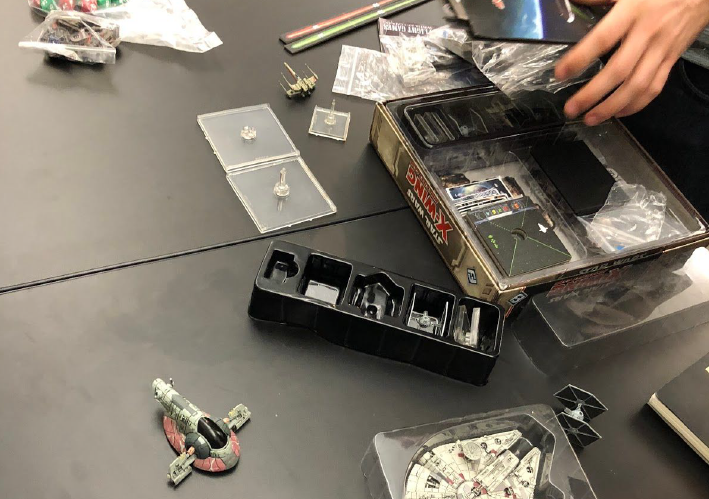 The corners of this field were marked using coins.

To setup the mission, the teams first had to assemble a squad with a point maximum value of 60 points (a value I lowered from 100 points to reduce the complexity of ship upgrades).

The teams were as follows:

Then, the teams played rock paper scissors to determine who places the asteroids on the field first. Empire won the RPS, and put the first asteroid onto the field. The remaining asteroids were placed in alternating order between empire and rebellion.

Finally, the teams placed their ships within range 1 of opposite boundaries on the field. 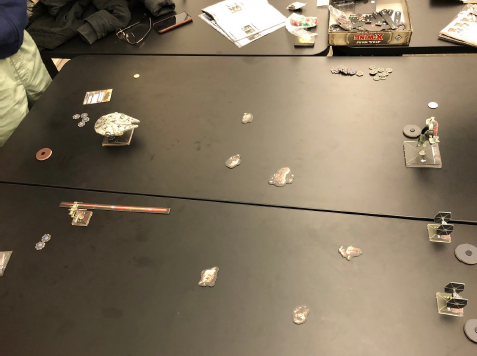 The players chose their turns on the turn dial and placed them face down next to their ships.

Then, the ships all activated their movement from lowest pilot skill to highest. So the Two academy pilots and the millenium falcon (a pilot skill of 1) moved first. To determine which one gets to move, the players played RPS for initiative. Empire won, so in events of a pilot skill tie, empire would move or attack first. The two academy pilots thrusted forward into the center. The millenium falcon, firespray, and red squadron pilot all flew forward in that order.

After a player moves, they can then take an action. This action is determined by their action bar, which can be a target lock, evade token, focus token, or a barrel roll (TIE fighters only).

Next, the attacking order is determined from highest to lowest pilot skill. Therefore, the order was red squadron pilot, firespray, millennium falcon, and lastly the two academy pilots. No pilots were in range of each other, so no one could fire.

Once everyone resolved their attack turns, the round is over and any tokens taken for an action go back to the token pile (in other words, you cannot stack evades and focuses).

The TIE fighters banked right, the falcon turner hard right, the firespray inched forward, and the red squadron pilot went forward. The TIEs took evade tokens while everyone else took focus tokens. Red Squadron pilot landed two hits on one of the TIEs despite the extra evade. The firespray had range 1 advantage, and damaged the falcon’s shields. 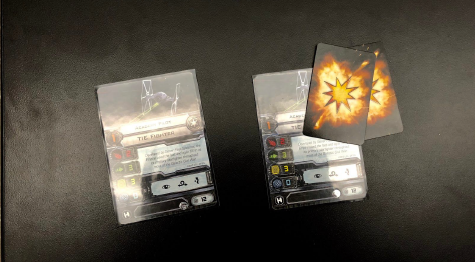 The TIE fighters rounded the asteroids and performed a slight barrel roll to remain in arc range of the red squadron pilot. The falcon thrusted forward into an asteroid but remained unscathed, while the firespray banked right to have its back arc in range of the falcon. The squadron pilot moved forward and fired at the Academy pilot, landing another hit and blowing her to bits. The firespray landed more hits onto the falcon, disabling its shields. 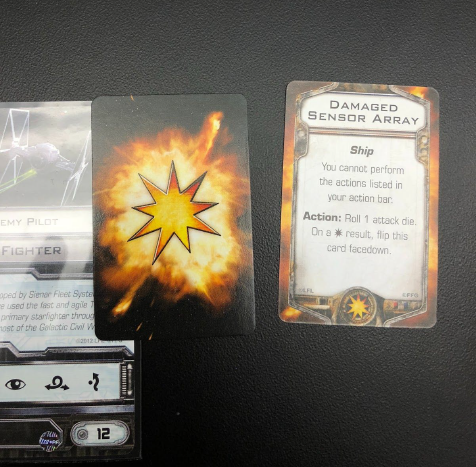 The academy pilot turned hard right to get in range of the red squadron pilot. Unfortunately, the pilot took an evade token and dodged the volley of lasers. The falcon, with its 360 degree arc, fired back at the academy pilot and landed a hit and a crit, or a face up damage card. The card prevented the pilot from performing actions, and had to roll an attack die to determine if it could remove the status effect. The firespray performed a k-turn to turn back around and charge back into the asteroid field.

And here is where the game came to a stop due to time constraints. However, it started to look grim for the empire. It would be an unlikely comeback for the two combatants, but possible if they believed in the heart of the dice.

This session report is very comprehensive. I haven't play this game before, but each step/turn was explained in detailed that I feel I would enjoy the game. There was also a lot of strategies going on and each move was pictured with nice descriptions of what actually happened.

This session report is readable and very interesting. It meets the minimum requirement. I learned that this game has 3D model and the rule is mixed of chess and the Death Racing movie where defend and attack can be activated at each turn.

Make sure to post this on the canvas too!