During my video game lab, I played six flash games to analyze and play critically with comparison to each other.

These are the six games I played:

Of the six, I want to take a close look at Canabalt vs Super Puzzle Platformer.

Canabalt is an endless runner (I think?) where the player must sprint through dystopian black and white building tops using only jumping as input as the player controller character runs automatically. The game starts you off running away and jumping through a glass window reminiscent of action movies a la Bourne series or Winter Soldier.

Once the player has jumped through, the game has boxes and roof objects strategically randomized on roof tops to force you to jump, and the buildings are spaced apart. These random objects can trip you up if you quickly have to jump or overshoot the next building and hit something slowing you down. If you get to slow, you lose. If you fall off the building, you lose.

The games main incentive is distance as a score. Outside of this, there is no narrative as to why this person is running away. 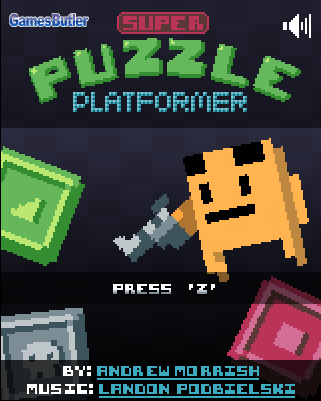 Super puzzle platformer is a mix of tetris, bubble bobble (or Dr. Mario), and shooting. This game asks you to shoot connected color blocks in an effort to get an explosive combo, after which coins fall in that combos spot. Spikes and falling blocks (or falling blocks with spikes) will kill the player.

Therefore, if you get a combo above the spikes you can't get the score. This makes the player create strategies on how they acquire the falling coins and making sure there are blocks underneath a combo.

Players can move side to side, jump, and shoot in the direction they are facing.

To mix up the gameplay, Super Puzzle Platformer will introduce new objects and upgrades that change how the game is played. When you get enough score, you shoot double instead of one laser and the game may speed up. As you live longer, blocks with spikes may come down or entire rows of blocks will fall on the player. 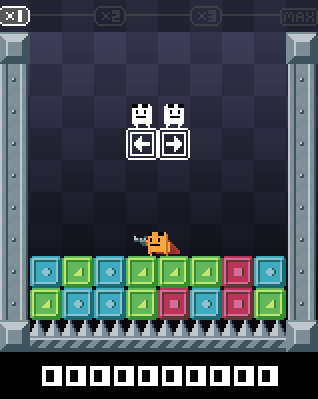 Both Canabalt and Super Puzzle Platformer are entries into the arcade endless genre. However, SPP has many more mechanics going on within the game asking more from the player, where Canabalt seeks only to test your reaction speed and timing. Both games use these mechanics to generate a feeling of submission, or more specifically: flow. Once the player has become adjusted to the mechanics, players will eventually enter a state of flow, where they are so focused on the game that they do not focus on the systems of input, only what challenge is coming towards them.

I will say that on my first playthrough of Canabalt I had heavy eye strain. This might have been caused by a low framerate on my computer (which was more noticeable on my partners), but after playing at home it is slightly better. I would not be able to play the game for a long period of time. 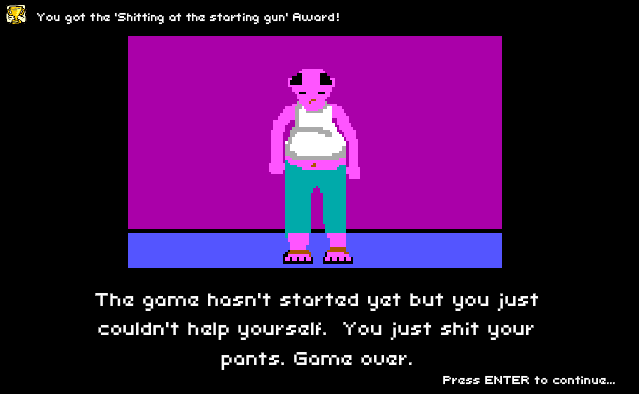 Don't shit your pants is a typing mystery game where players are tasked with 30 seconds to go to the bathroom without shitting their pants. This game is expertly crafted for humor, and the mechanics really help the delivery. Perhaps the game could have been realtime where players had to do some platforming or puzzle solving before they shit their pants, but the humor in this game stems from the discovery of phrases and commands you can make in the command line to avoid shitting.

This format of typing in commands lets players use their own knowledge to try and determine what this person can do to shit. It is a genius way to structure this comedic game for maximum fun. 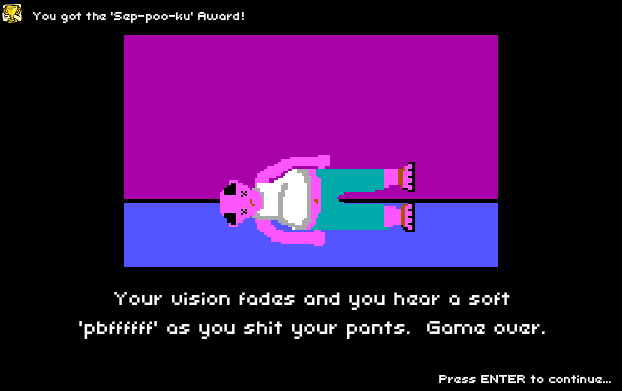 Even though the game is singleplayer, the humor in finding these solutions can very well be a group effort. When I finished my playthrough having a laughing fit, my partner and I recommended the game to a nearby group. I had just as much fun watching people solve and crack up at shitting their pants.

This is a testament to how good a game is. In my opinion, if a game can be watched and have some type of alluring quality to it, it will be very difficult to not only market but to enjoy also. I believe that the connection between playing and watching games is key to the success of a brand. Games like Don't Shit Your Pants are ones that can become successful by word of mouth or  a passing glance, where something like This is The Only Level is somewhat unwatchable after the first five minutes, since the games main mechanic of changing the mechanics for one level can become boring if you aren't the player.