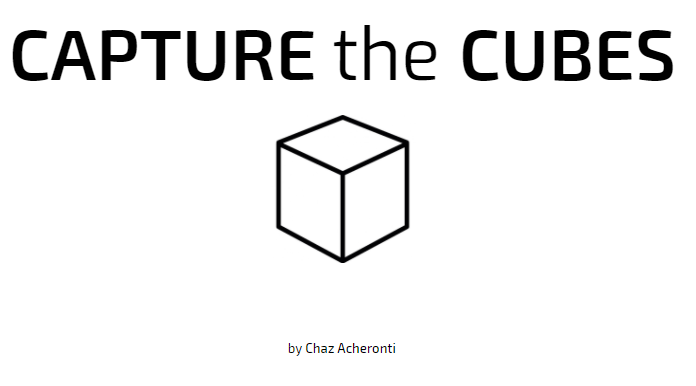 Capture the Cubes is a game of tug of war, where players compete to control all capture points by spawning soldiers and getting resources. The team that has captured all the hexes or is the last color standing wins!\

The first iteration focused on the usage of action points for all interactions within the game.

Players sought to control all points or eliminate the enemy team. They started with three soldiers on opposite ends of the grid and and played rock paper scissors to determine who went first.

Soldiers had 4 action points and could perform the following.

To attack, players could attack any adjacent unit and roll an 8 sided die. If the die was even, the soldier lost one action point. When a soldiers action points reach 0, they are dead. 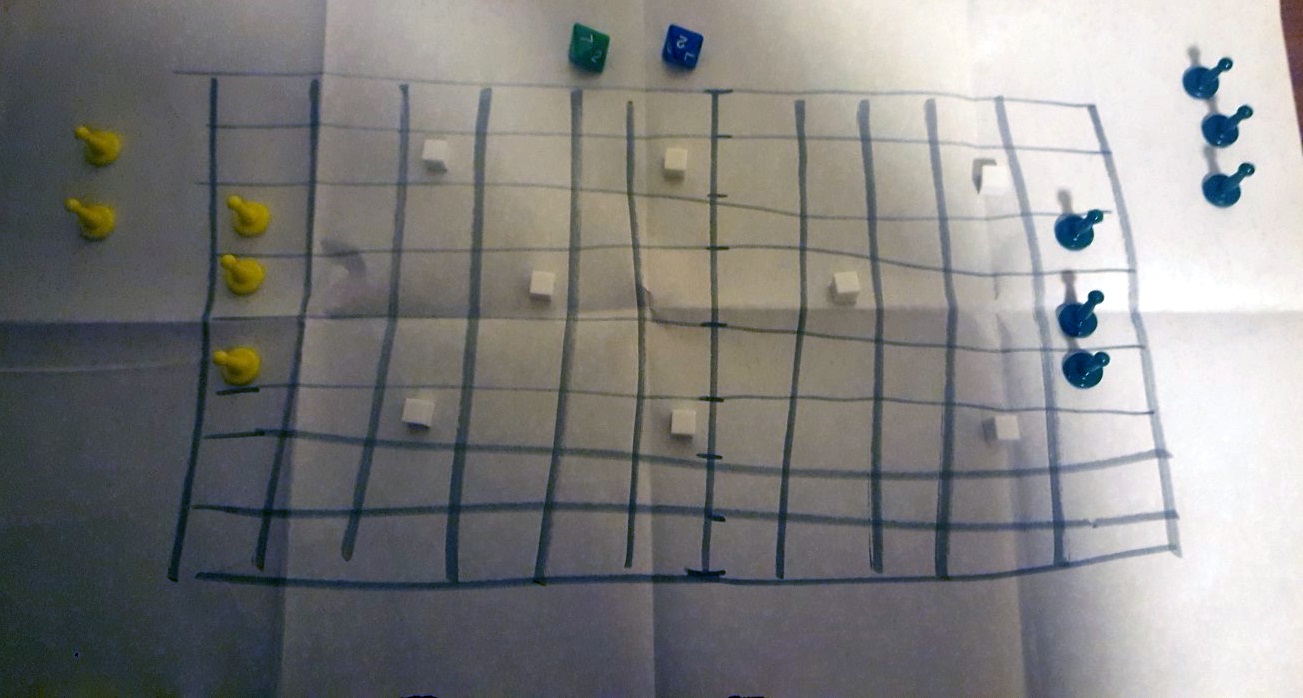 We placed our units on opposite sides of the grid with a cross shape of green resources in the center of the field.

I won the RPS, so I went first.

On my turn, I moved my units straight toward the closest bases, but I didn't have enough AP to reach them.

Matt did the same on his turn.

At this point, we both began capturing bases while our other units clash in the middle, spending points to attack each other.

For example, I spent 4 action points to attack one of his units next to mine, and only one rolled an even, reducing his soldiers points from 3 to 4. This meant his soldier could no longer perform multiple actions.

However, on the next turn the soldier managed to bandage itself by rolling an even number on an 8 sided die, then attacked my soldier and brought my health down to 3.

Unfortunately, several problems emerged from this interaction of mechanics.

Finally, we quickly realized that the game would never end. We would spawn soldiers in infinitely and soldiers would never die, and we would endlessly be capturing points for likely an hour before the dice rolls would make someone

Once I took my copy of the board game home (using red and blue pieces), I decided the most important attribute to change was the action point system. It was too complicated for the nature of the actions and game play going on, and needed to be simplified and streamlined to make a faster paced game.

You can see the rules for the second iteration here.

The changes made include the following:

For this play session I was tasked with playing the game with a non-game-designer. This play through was meant to test for "fun"ness, so I decided to test it with my Significant Other.

Before we started playing, she criticized that the game looked boring and complicated. I was unable to get through the rules without some groans and ughs.

We setup our troops on our respective sides ( I blue ) and we realized that with three there was an optimal position to reach the outside cubes. In addition, whoever went first would get the first capture. Therefore, since I went first I captured three points immediately and spawned a soldier.

She was able to fight back on the bottom resource by killing my soldier and stole back my resource, then she spawn her soldier in.

However, the next turn quickly turned sour as I was able to get man successful 4s on my attack rolls, killing nearly all of her units.

Here is where she criticized that a 4+ roll is more than a 50-50, making it likely that soldiers die.

In addition, soldiers cannot defend themselves. They are simply attacked directly and die at the whims of the attacker's roll.

This game ended by her last red unit stranded on the blue side. She moved to capture another point but did not have enough spaces to make it. My soldiers moved into the middle capture point and killed her soldier with only one roll.

On the second playthrough, Marilyn got the more successful rolls this time as she wiped out my units in the middle of the field and spawned up to 6 red troops. I was running for my life across the board attempting to capture points to spawn friendly units in, but it was too late as I was surrounded on the bottom hex point, murdered by multiple dice rolls.

Her final criticism was that the game was aesthetically boring. I think this issue needs to be fix by giving context to the conflict of the game. However, I feel the game is currently limited by the blank board and similar looking units. If there was diversity in the tokens I used or actual models (like scifi soldiers or mechs), it would greatly enhance the feeling of perhaps urban attrition. For example, risk uses simple tokens but the art of the board gives it the context of world conflict.

The following changes were made in the third iteration:

These changes we made to promote player choice, variety of strategy, longevity of soldier lives, and finally the aesthetic of controlling a squad of soldiers rather than just three.

By having 5 soldiers, players can decided to move in groups or to disperse and chase down the capture points. Or, they could move their soldiers at the initial control points to defend them from attackers, then cautiously capture and push the enemy with spawned units.

This session exemplified the player who goes first has significant advantage.

I played blue and William played red, and I won the RPS.

Since I go first, I moved all my units to the optimal position to capture on the next turn. Since William went second, it was impossible for him to capture these points without fighting me for it. Once I got the resources, I spawned in two units and had defenders advantage on all three points.

On Williams turn, he decided to defend his points and fight for the top point. One of his units by the red side of the field eliminated my spawned unit.

We fought over the center point throughout the game, but William was getting overwhelmed with all the units I was able to spawn. While he might have killed many of my soldiers throughout the course of the game, I had much greater map control than his units, so he was unable to spawn in new ones.

This control allowed me to prevent him from gaining anymore resources, eventually leaving him trapped with one unit on the field. 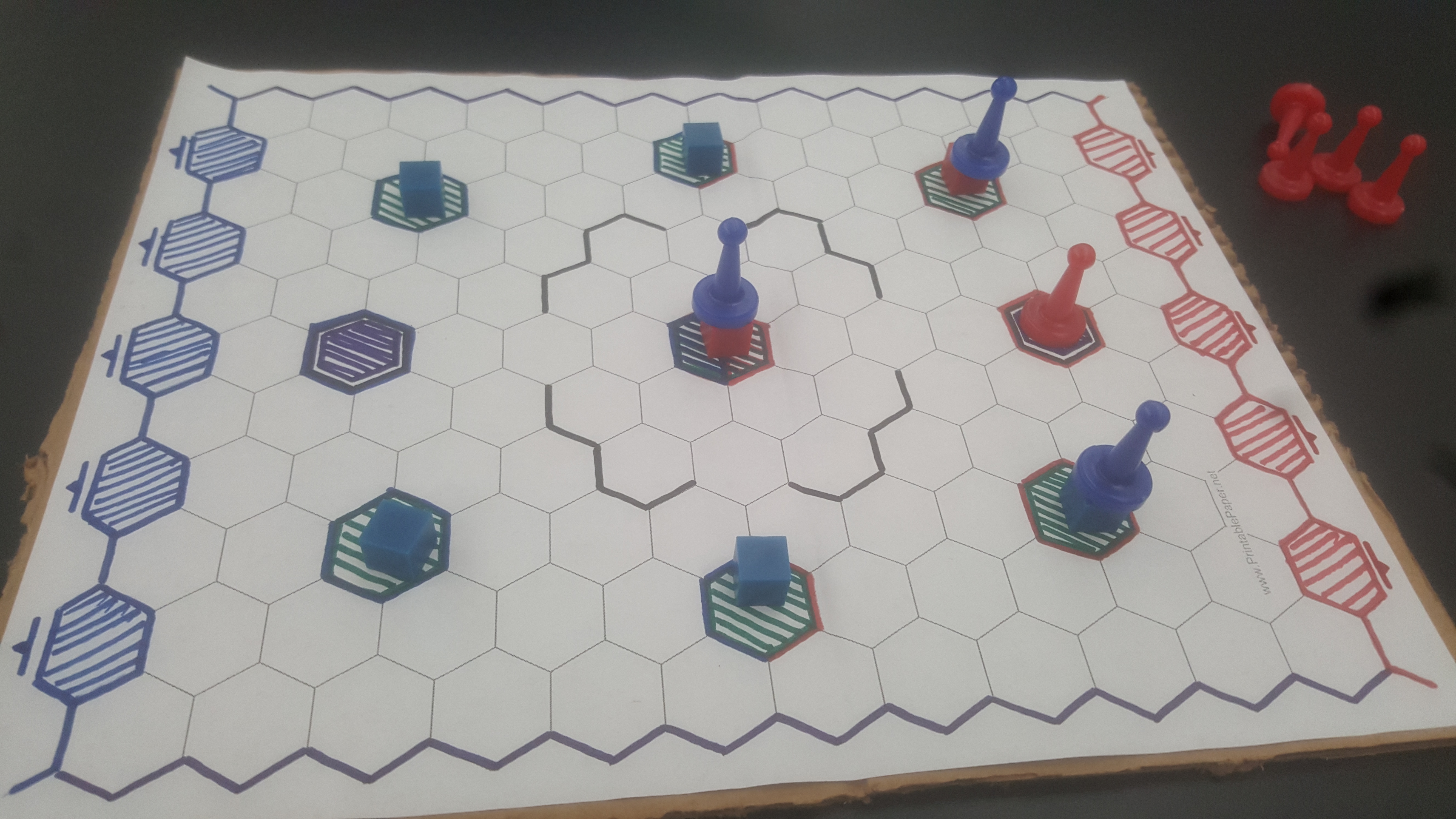 As pictured above, I had control of all of the resources except two, which I had already begun capturing. His only choice left was to fight for the center to get more resources. However, the most pivotal dice roll put my defender on top. 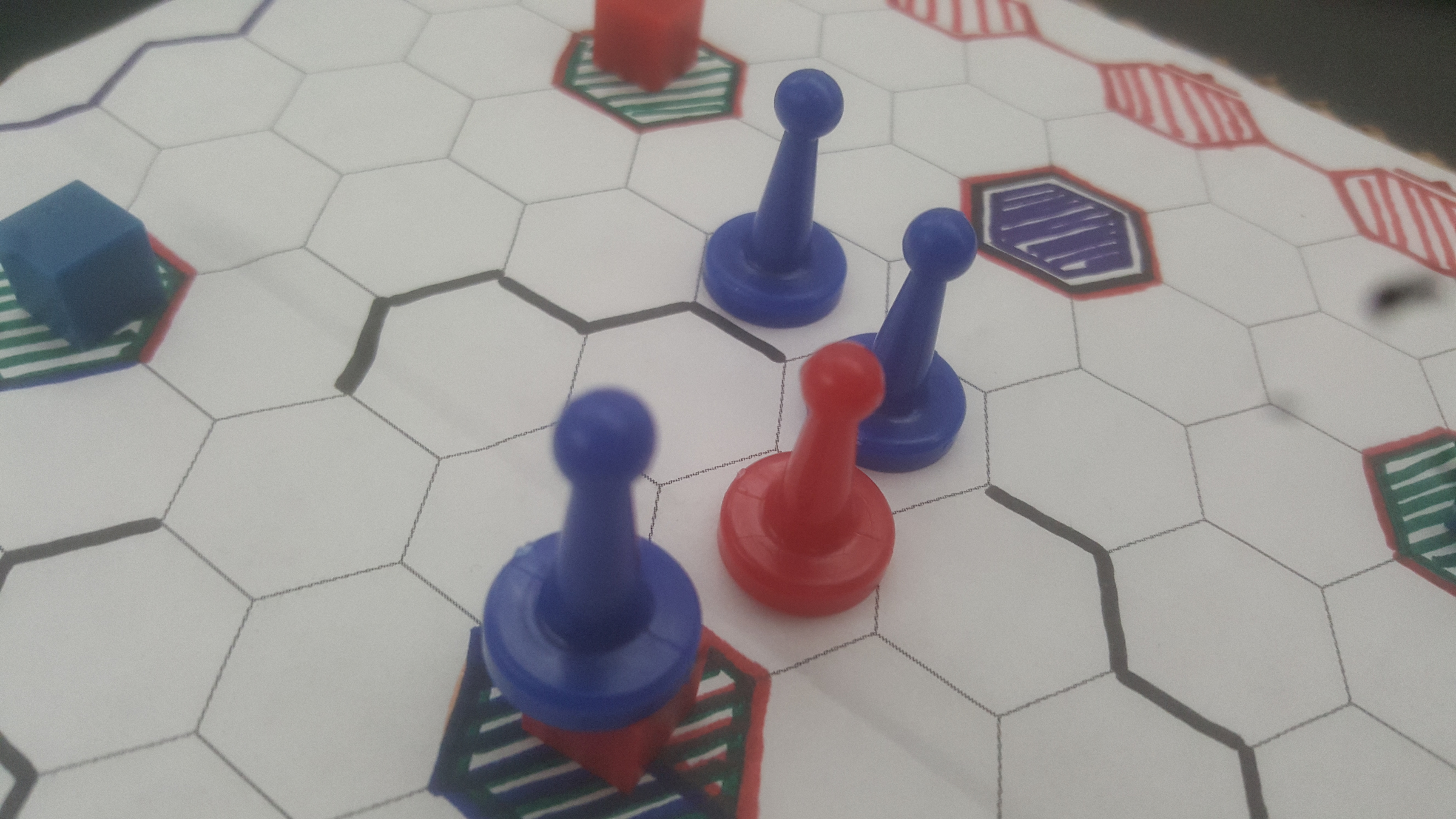 I had him surrounded and used all of my attacks to try an eliminate the last soldier. On my first roll, I got an 8 and won the game. 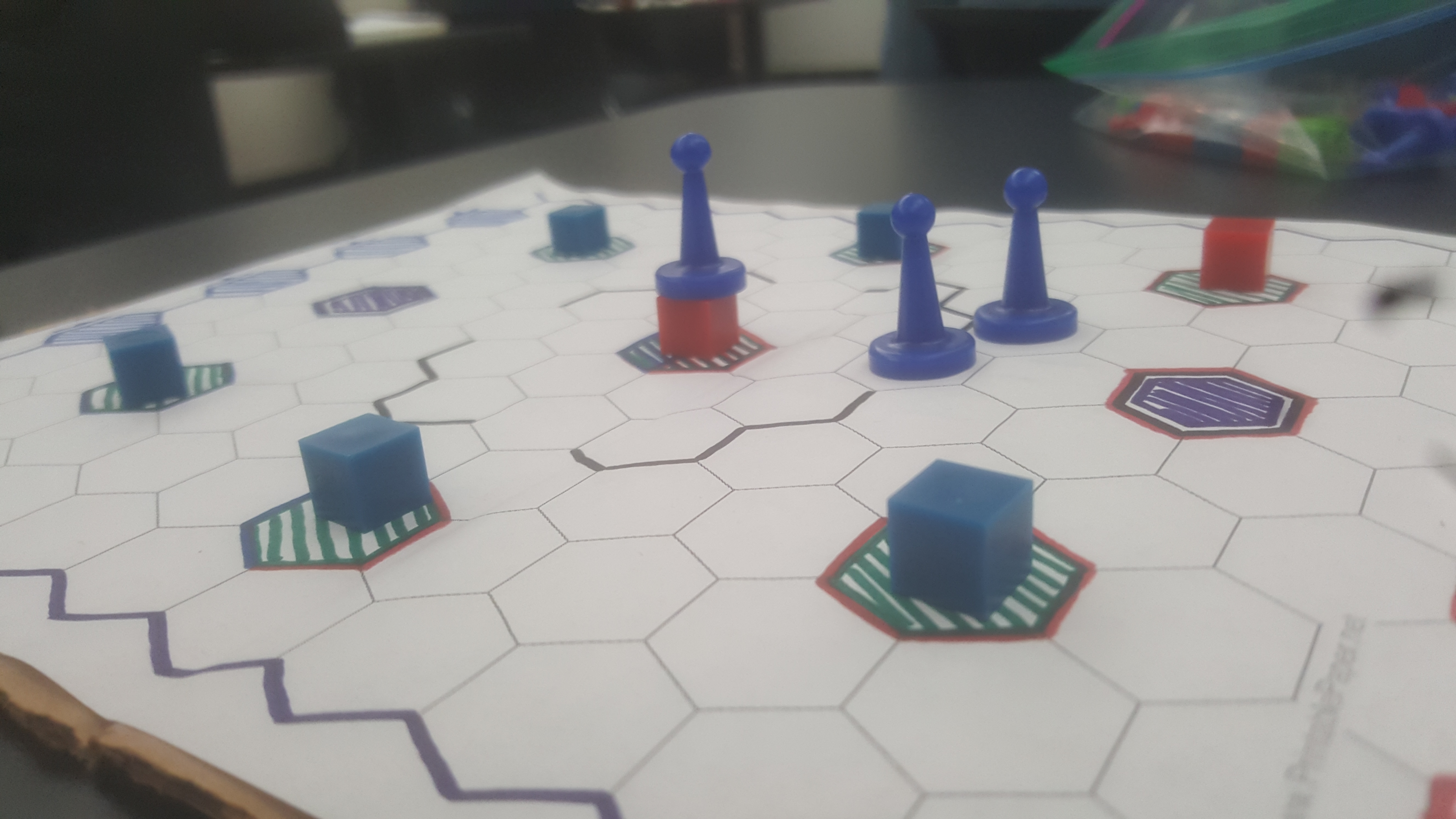 While the game involved some strategy, there is a clear flaw. Whoever goes first will get immediate control over the middle three capture points no matter what. This HAS to change or else the game will never play fair. Especially because the new defense mechanics favors the defender, and if you can capture a point the fastest, you have the optimal strategy.

This is a direct result of the a lack of unit diversity. If different units could attack at different ranges or had different movement abilities, different strategies would arise and the first player advantage would disappear. However, I do not have a variety of models to choose from (only one).

To work within these limits, my last change to this prototype is that whoever loses the initiative test (RPS, dice roll, etc) must move two pieces. Once they have moved, the player with initiative may move all pieces to start the game.

This allows two things to happen: 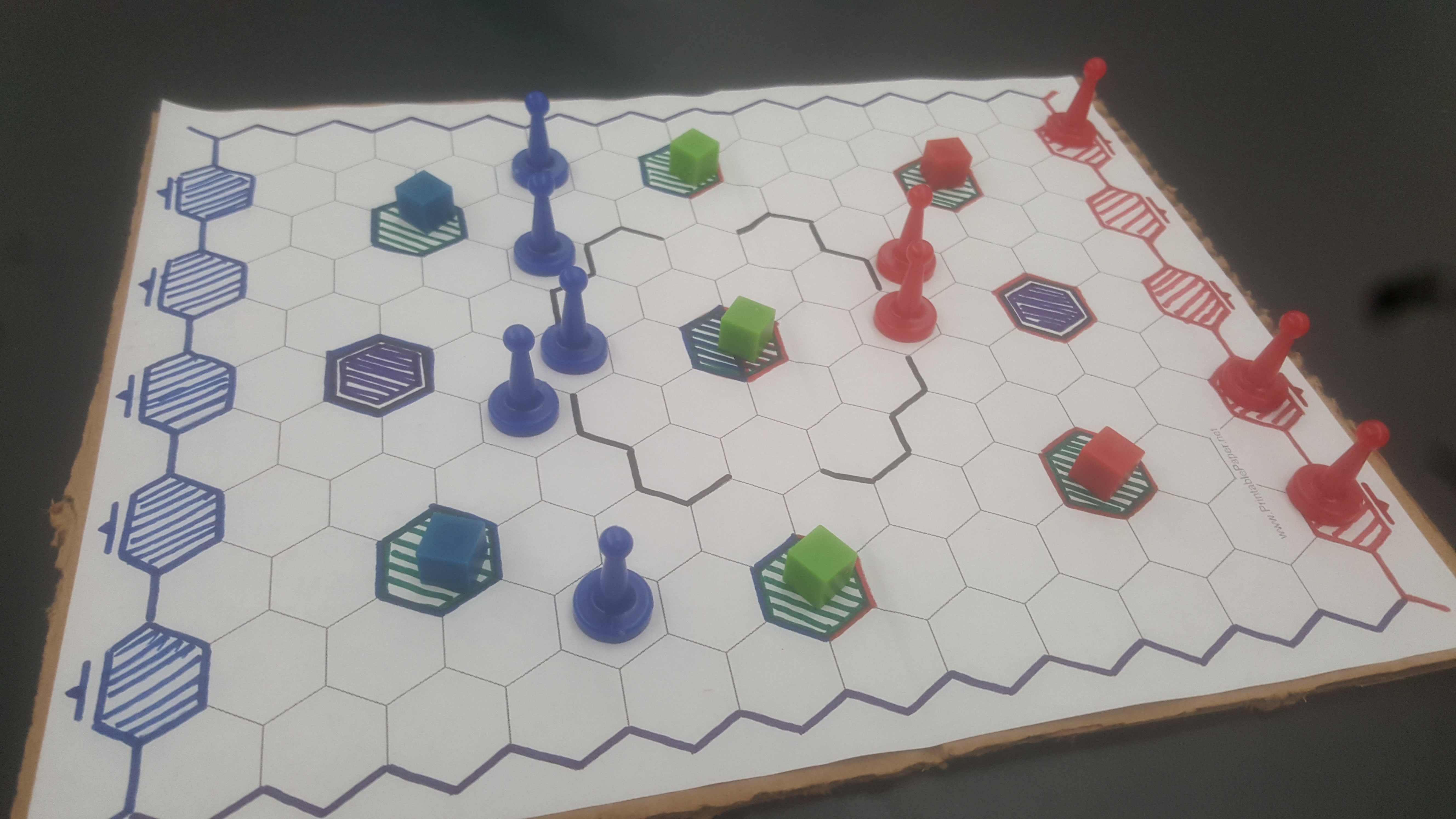 This is an example of the above changes.

Thanks for reading this prototype iteration blog!