Ingress is an augmented reality game that works as an alternate reality view of the world around us. The game includes a narrative about precious Exotic Matter, which is a special energy that the Enlightened wish to use to evolve the human race and the rebellion want to keep safe. The game presents itself as a Matrix-esque in the computer style with many electronic voices and noises for feedback.

The goal of the game is to capture Portals that are usually landmarks in the surrounding environment like a city statue. Once captured, linking three of these portals creates a control field, the ultimate goal of Ingress.  It seems the game is never ending, where it simply approaches a point where it is impossible to take over a city if there is too much of one color.

The primary mechanics of Ingress include area control through line drawing and area enclosure and an action point allowance system (in the form of XM).

XM can be used to hack the portals to earn items, deploy items, or deploy resonators that will capture the portal for your team. When you have enough portals controlled that are near each other, links will be drawn out towards other portals. You can then link one portal to another until you get full area enclosure. In addition, hacking is a random chance. It was uncertain what the chance was, but during play there were unsuccessful hacks.

The Aesthetics of Ingress include Challenge, Fellowship, and Fantasy. These aesthetics are produced by the dynamics of the cooperation of teams. In Ingress, it is unlikely that a single person will completely overthrow a location with their teams color. Instead, they may be aided by a teammate at the same time or perhaps days later due to the persistence of the world. The limited amount of actions that can be taken due to the XM energy also encourages players to combat challenges together. For example, a player on green team may want to reinforce a green portal even if they dont have a resonator on it. 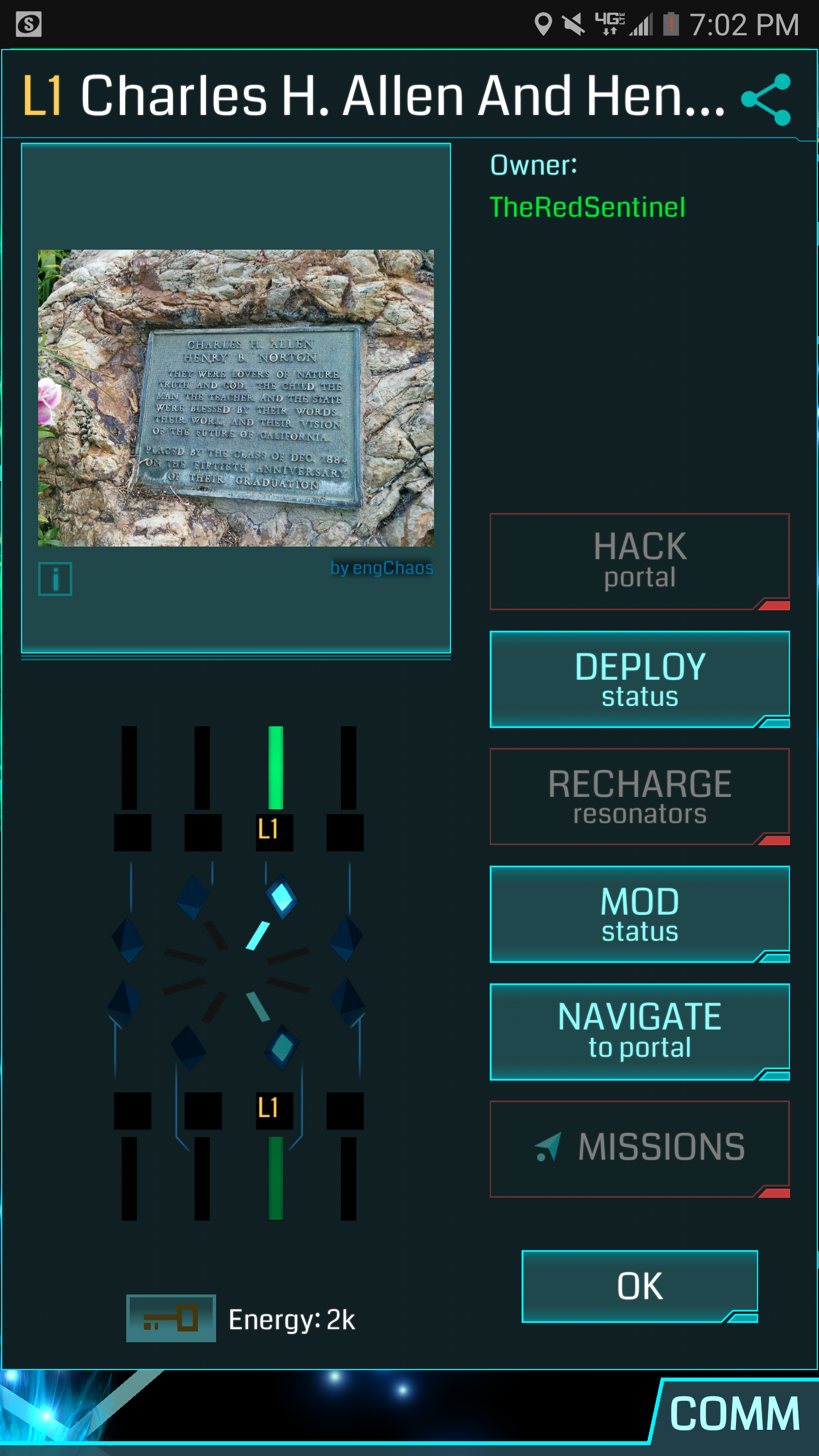 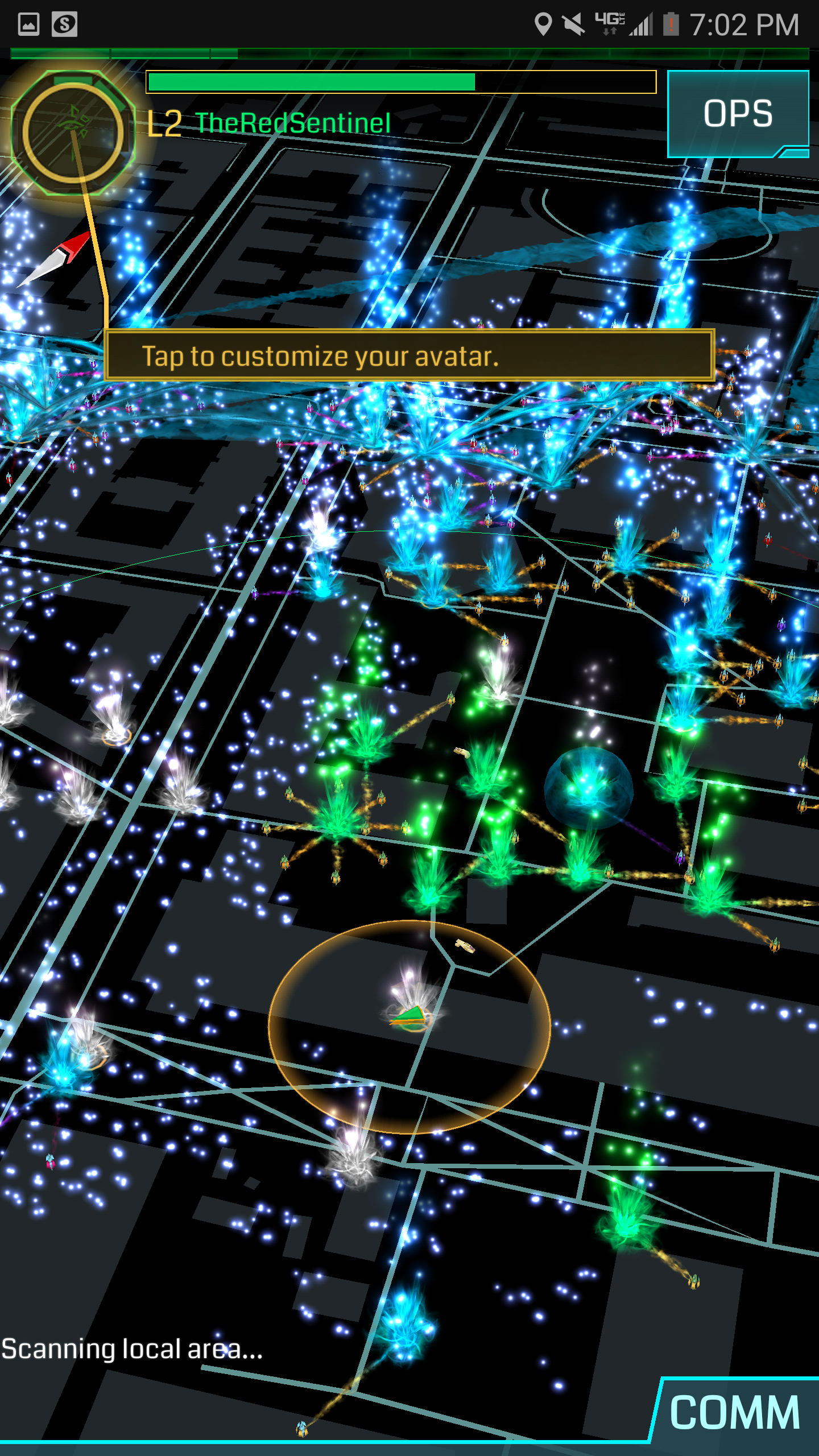 Unfortunately, my session did not last as long as I had wanted it to go due to my low battery percentage. I ventured the campus with Matthew Binning and Ki Sung Park, attempting to understand the odd interface of Ingress. My initial feeling was confusion as I tried to understand the interface and what exactly my goals were.

The game prompted me to deploy a resonator as my first step in playing. When I checked the nearest portal, I was unable to deploy any resonators because it was on the other team. I did not understand how to place the resonators until later when I was at the CCB building. A grey portal with no resonators allowed me to place one by hitting confirm, taking the portal under my control.

I then proceeded to walk down campus towards tower hall while my classmates and I captured as many grey portals as we could (shown above). The majority of San Jose is controlled by the Rebellion, so I am not sure how long my portals will stand.

One problem I had was that I ran out of XM incredibly fast. This was due to the fact that I placed all my resonators on few portals (depth vs breadth). While I made those portals secure from attack, I was now out of XM energy and unable to place more. I quickly learned that placing single resonators on grey portals was a better start to gaining control than solidifying only one portal. After I noticed this, my phone died and it was time to head home.

Perhaps everyday I walk to class I can take this campus back for the Enlightened!